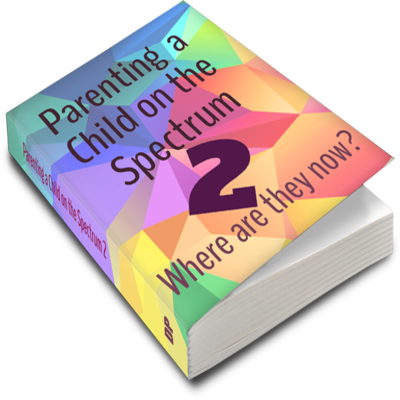 Parenting a Child on the Spectrum 2

Special: For the month of May use the coupon code Spectrum when you  buy Parenting a Child on the Spectrum 1 and 2 together and get $10 off the total purchase price.

Four years ago, Parenting a Child on the Spectrum – Inspiring accounts of the ups and downs that go with parenting a child with Autism was launched.

What an experience!  With contributions from authors all over Australia we had a great time writing, compiling, editing, publishing and then launching the book.

Many of the authors were able to join us at the official launch which was massive and the Captain Cook Bridge in the heart of Brisbane city lit up blue for Autism and for the launch of our book.

We had radio interviews all around southeast Queensland including the ABC, and the book appeared in a number of newspapers and magazines over the course of the following month.

Since being published, the courage of the authors of the various chapters have been inspiring parents across the globe. Their willingness to be vulnerable in the hopes that sharing their stories would help someone else who had found themselves in a similar boat, has been enough to restore the hardest heart’s faith in humanity, and the resulting book had been far more impacting than any of us ever could have imagined.

Needless to say, I am eternally grateful for each and every contributing author, but more than that, I am in absolute awe of their ability to rise above their own circumstances and give wholeheartedly to so many others.  They are all amazing human beings and I am truly grateful to have been able to work with them.

After the launch, and as the excitement had passed, I thought that was the end of that particular story and I threw myself into a number of new publishing projects.

Then, the questions started coming…

What had happened to all the authors?

Did Cindy get her school started?

Did Randa get her MATES program off the ground?

What about the kids?

What are they all doing now?

Finally, and quite organically, the idea was put forward that we put together a follow up book and lots of the authors agreed it was a great idea.  They’d experienced lots of change and growth in the years since they’d written their first chapters and they were keen to write about the changes.

It has been so exciting to work with many of the authors once again.  Every single one of them are doing amazing things and they are so good to work with.  I think in essence we all want the same things – to feel connected and to help others.

I trust you will enjoy catching up with the authors and reading about what is happening in their lives now.

One thing I can promise is that every single story you are about to read is an adventure and you will be at least as inspired by their journeys now as you were when you read their first stories.

There are no reviews yet.